As part my work this year, I am fortunate enough to be able to travel with el Centro de Estudios Ecuménicos (CEE). CEE works with a variety of states throughout Mexico, including Guerrero and Chihuahua, but I travel to their projects in the states of Oaxaca (on the southwestern coast of Mexico) and Puebla (southeast of CDMX). This past weekend, I traveled with Ana Paula (my direct supervisor), and two other coworkers to the coast of the state of Oaxaca, to participate in a meeting of la Escuela de Formación Integral (la EFI). La EFI, as the people at the CEE call it, is collaboration between the CEE, an environmental activist group called GEA, and local catholic churches to give parishioners the opportunity to combine Catholic theology and liturgy with an understanding of environmental and humanitarian issues, such as reduction of pollution, the danger of mega-projects such as fracking and hydraulic dams, safer farming practices, indigenous rights, and sustainability. The school meets once a month, and began in 2015, with this year marking the second class. The new class rotates through three topics, with each topic lasting three months: ¨Liturgy¨, which is taught by priests from the local church, ¨Nourishing the Earth¨, which is taught by GEA, and ¨Popular Bible Readings¨, which is taught by Ana Paula. The second-year class rotates through three new classes: ¨Liturgy II¨, ¨Pests and Illnesses¨, and ¨¨Social Justice¨, which is also taught by the CEE. There is also a unique opportunity for members of the second-year class to train to be facilitators, in order to lead future sessions on their own. This past weekend, I assisted with the Social Justice class, which was led by my coworker Daniel. 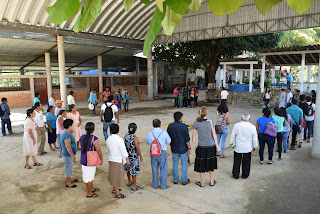 The leader and members of la EFI. 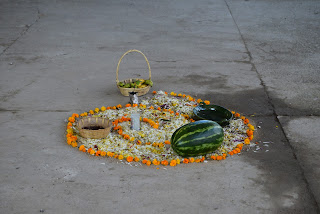 The centerpiece at la EFI, representing the natural resources
that we are called to protect,
and the inter-connectedness of life.


Our trip began as the four of us crammed into a tight little Jeta and made surprisingly good time leaving the city. After more than a month of being in the city, I was excited to get out of the hustle and bustle, get some fresh air, and see some more trees. Although I enjoy the pace of city life and the variety of things to do, I am not a city-slicker at heart, and prefer to be in nature. As we hit the highways, we sped past gorgeous mountains and gaping canyons, before the landscape began to flatten as we neared the coast. It was quite the experience to be in a more rural part of Mexico, where we saw several people riding on horseback alongside the two-land highway, a variety of ducks, roosters, and chickens roaming people´s yards, and even had to stop to wait for an unaccompanied herd of cows to cross the road.

After 9 hours and 300 miles, we rested for the night, before blasting off at dawn the next morning to the teeny tiny pueblo that hosts la EFI. We arrive at the venue, which was a large, open air patio with a high, vaulted ceiling that looked similar to an aircraft hangar. The temperature had quickly risen as we had descended from high-altitude CDMX, and at a temperature of 90 degrees with humidity to spare, part of me felt that I was back in NC. As we met the pastors and attendees, I was struck by the height difference, which, already great in CDMX, was even greater in Oaxaca. (Ana Paula told me that when I walked in, several abuelitas exclaimed ¨She´s so tall!) After opening in prayer, the 60 or so participants went to their respective classes, with about 9 people in the social justice class.

I listened as Daniel led the group members through discussions of the intersections of social justice and environmentalism, specifically citing instances of contamination and water pollution. We discussed the intersection of environmental stewardship and faith, and how we are called to take good care of God´s creation. The discussion continued with a intensive look at the International Declaration of Human Rights, and how communities can work to protect those rights, and call out the government when it fails to do so. Group members cited specific instances of human rights violations in Mexico against women, members of the LGBTQI community, indigenous groups, and impoverished communities. 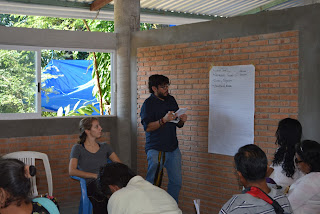 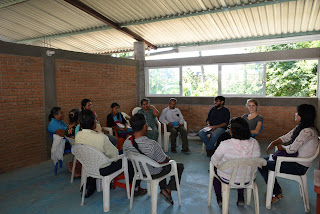 The group in discussion of environmental stewardship and human rights.
I had the unique opportunity during the workshop to share my personal experience in relation to environmental issues in the US. When Ana Paula asked me to give a brief description of environmental issues in the US, I was overwhelmed as how to describe such a complex issue in an enormous country in such little time. I focused on a few statistics that offered some context for the US´s environmental impact in the world, such as the fact that the US is the second largest consumer of electricity in the world and the second greatest contributor of greenhouse gases. I have encountered a stereotype in Mexico that US citizens are wasteful people, who do not think about how they spend their money or consume natural resources. While that is certainly not true for every person from the US, it was sobering to describe the disproportionate amount of resources that the United States uses in proportion to it´s population. However, it was impactful moment for me of greater international understanding and sharing of information. To be able to represent my country is a great privilege and responsibility, and I believe that environmental issues are in desperate need of greater international dialogue, as we all inhabit this one planet, regardless of our nationality. 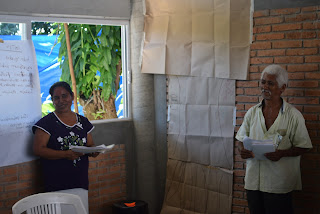 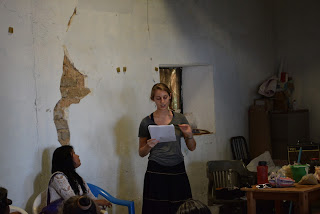 Sharing some of my experience with US environmental issues.

As the workshop wrapped up for the day, we enjoyed a late lunch, said our goodbyes, and hit the road back to Mexico City (although not before enjoying the beach for a few hours on Sunday morning). With a total of 20 hours of driving in a cramped car in three days, it was a long and tiring trip. However, it was also a trip filled with conversation, laughter, and fellowship with my fellow coworkers, and the members of la EFI. I was struck by the power of having a space to openly discuss issues of human rights and environmental stewardship, and to foster the empowerment of people and their communities. The opportunity to see another part of the country and a context very different from my life in CDMX is a privilege, and I look forward to continuing to get to know and work with the people of la EFI. 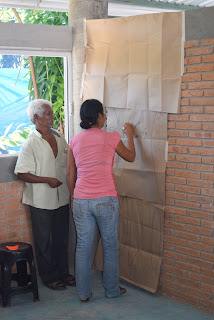 The group participating in an activity called ¨The Tree of Hope¨.
Group members were invited to list the challenges facing their
community, as well as the strengths and resources,
before adding their handprint as a sign of solidarity. 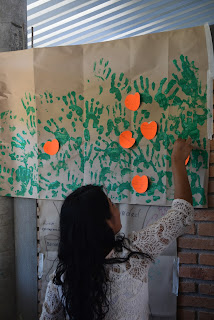 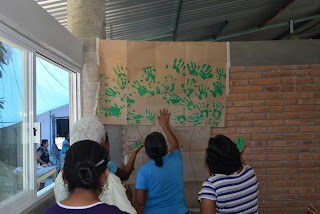 To learn more about the CEE and it´s various projects, check out this page! http://estudiosecumenicos.org.mx/our-intervention/